Tagvenue as a tool for team socials. A case study. 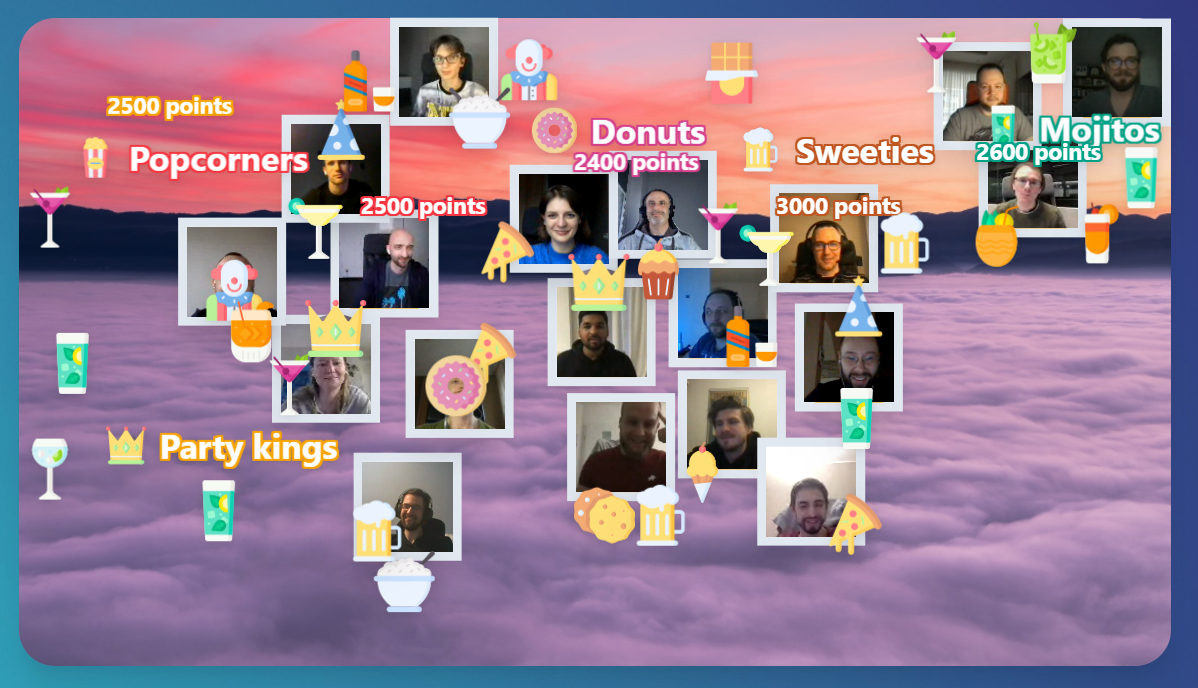 Team socials happen regularly at 10Clouds as we encourage people to hold events with their project teams. They’re part of our ongoing effort to make sure that we can hang out and get to know each other as people even in a remote setup. Some teams are better at organising a fun event while others need a bit of help. This is why, when we heard about Tagvenue Virtual, we decided to give it a go.

Since a Tagvenue Virtual event is designed for larger groups (6-25 people), we decided to test the platform by inviting members of different teams to play together. This gives people a chance to get to know others within the company, even if they don’t happen to meet working on projects. We invited 25 people to join to test out the tool and see if it is a long term option for our company social events.

What is Tagvenue Virtual?

If you’ve ever organised an event, you may be familiar with Tagvenue, the service allowing you to find the right space for your event. Tagvenue Virtual comes from the same team and offers a platform for team events as well as a host to ensure the team can just sit back and enjoy their time together.

The platform is very easy to use. No need to use Zoom, Teams or Google Meet, no need to download anything before you join. It offers several different games and every event is prepared with the attendees in mind - the Event Production team decides in advance which games are most likely to be a success based on what they know about the group.

From an attendee perspective, all you have to do to join the event is to click on the link you’re provided with by the organiser. When you join, the host welcomes you to the event and assigns you to a group. Once everyone is ready, the games start.

I am impressed that the girl who moderated the event was so happy and full of energy! That was a nice surprise. - Kamil Herbik

The event is a series of rather quick games the host had chosen based on the information about the group. They’re your usual suspects, such as trivia or pictionary, with little twists. For example, during trivia only the team captain can select the right answer and this role is assigned to a different team member for every question. It forces you to pay attention - zone out and you risk missing points!

Even though there were almost 25 people at the event, everything worked smoothly. Games such as “guess the melody” were very interesting and I was most surprised that we got to draw together during pictionary. I wish we had more time afterwards for talking. - Kamil Powałowski

The whole event is designed for larger groups of about 20 people. A lot of interactions happen within teams only - when you compete with others, you’re able to communicate with your teammates, but others in the group can’t hear you. However, there’s also plenty of opportunities to interact with the larger group. When the time comes to present the answers and points gathered by each team, the host would ask additional questions allowing everyone to hear the answers.

After each game [the host] asked many questions which helped us learn a bit more about each other and have a laugh. I think she was a big factor why this event went well in my opinion. - Bartosz Bilejczyk

When the games are over, all of the attendees are invited to take a photo together at a virtual photo booth to keep as a reminder of the event.

What did we learn by using Tagvenue Virtual?

The overall satisfaction from the event was high with an average score from all the attendees at 4.3 out of 5. The games were rated at 4.8 and the host moderating the event at 4.7. In our book, that’s a pretty good result, but we did have some reflections about when a Tagvenue Virtual event is a good idea - and when it’s not.

Use it as an icebreaker, not the whole event

The event served an important purpose - it allowed employees from different teams to get to know each other in an informal environment. Organising a team social is easy when you know the entire team. But organising an event for colleagues you’ve never worked with before can be tricky. You don’t know their sense of humour or how they like to spend time so it can be quite awkward to just sit in front of your laptop and have drinks over Zoom. In this case Tagvenue Virtual is an excellent icebreaker.

I didn’t know almost anyone so the concept was very exciting but actually I didn’t get the feeling I learned much about others. I was surprised by how many people from the company I've never even heard of yet. - Martyna Gola

The downside of a Tagvenue Virtual social is that there isn’t really much time to get to know each other on a more personal level. Sure, the host will ask questions about some of the fun answers shared during the games, but that’s not the same as having a conversation. This is why we’d recommend to follow up a Tagvenue Virtual event with a video conference meeting where everyone can discuss what happened in more detail. If you learned that someone speaks 5 languages, spent several years living in Hawaii or plays an instrument you’ve never heard of, that extra time to talk will come in handy!

Use it for larger teams or cross-team socials

At 10Clouds, our teams never really reach the size of 25 people. So a social event for a group this large isn’t going to work as a team integration. Instead, it is perfect to use for multiple teams to get to know each other.

One of the pains in remote-first organisations is that you don’t get a chance to meet people randomly while getting some coffee in the kitchen or having lunch. It may seem like a small detail, but in fact it’s those relationships that allow important information to spread. You may get inspired by a solution developed by a completely different team on a seemingly unrelated project. Or, you may simply find out who to go to with different issues.

This is why it’s worth giving Tagvenue Virtual a try and inviting members of different teams. Help them develop relationships after the event and your entire company will be better connected.

The outcome depends on your team

You can say we tested Tagvenue Virtual twice, since we had a smaller group join a demo event before we organised the main Tagvenue Virtual social. Both groups were very different. The first time around we played with people from teams which tend to be more extroverted, such as marketing or HR, the second time we mostly invited developers.

While both events were described as fun, it was certainly a different experience in each case. These differences are definitely more visible than when you organise one-way events such as wine tasting or a cooking class, when you often don’t know how many people showed up and if they were really active.

This is why I think testing out the tool was very useful, but we probably could have chosen a group closer to the one that enjoyed the full time event. This would have given us a better idea of how people will react and the Tagvenue Virtual team could have adjusted accordingly.

All in all, the Tagvenue Virtual social was a very enjoyable experience and we’d definitely do it again.

Check out the website if you wish to give it a go!

An overview of AWS EKS - best practice and use cases