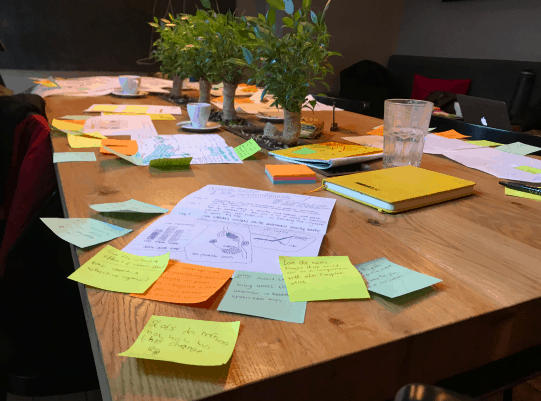 At 10Clouds, one of our core values is progress, and we’re always striving to be on top of the latest technological developments. We therefore decided that it was high time we got on board with Design Sprint 2.0, the most up to date version of the sprint. And what better way to test this out than by using the design challenge of improving air quality in Warsaw where our HQ is based?

Design Sprint 2.0 is essentially the newest version of the original 5-day Design Sprint, geared-up to work not just in startups, but also in large enterprises where designers are time-poor and solutions need to be found quickly. It’s major difference from the original sprint is that it takes place over four days instead of five. We decided to put it to use in solving the real-life problem of air pollution in Warsaw.

Why you might want to choose Design Sprint 2.0 for your project?

The major benefit of adopting the Design Sprint 2.0 methodology is the speed in which decisions are reached. This type of work cuts through the unnecessary admin generated by some other UX processes such as:

Design sprints bring all the relevant people together for four days of uninterrupted work, and, importantly, all decisions are made right there and then. There are tangible benefits not just for designers, but for all stakeholders in the projects.

Thus, other than speed, a second major benefit of the Design Sprint 2.0 approach is teamwork. Stakeholders who would have otherwise been absent for most of the design process, are now able to actively take part.

Our Real-Life Problem Statement for this design sprint:

How might we design a solution for Warsaw citizens to educate and encourage them to take action when it comes to air pollution, and which will also help to improve the air quality for years to come with the resources and technology we have available to us?

We spent the morning collating all the answers that we had to the ‘How might we’ problem above. Then we started creating categories for these using post-it notes, which helped us to see where there was a specific emphasis on ideas.

Later that day, we noted down all of the thoughts in the room, made doodles of the notes and defined them in 8 panels, with eventual solution sketches being created of one idea.

There were as many as 55 ideas in total! Below are a couple which were top of the list, but didn’t end up being selected:

Voting on the solutions: We started the day by voting on the entire list of solutions. We did some rapid research on each one, and then conducted heat map voting to select the best ideas. We also used speed critique to hone down our choices, and an eventual straw poll on the solution that we wanted to push forward.

Creating the storyboard: Each member of the team used a user test flow to design the bare bones of their own storyboard and then vote on one or two to prototype.

The solution that was chosen: a program aimed at changing Warsaw’s citizens’ approach to their transport choices, driven by a mobile app. It was based on four main pillars:

Day 3 is when things really got exciting because it was when we were finally able to start prototyping our solution, which we decided to present in several steps:

This was to make people aware what Warsaw could look like if there was no more air pollution: a green city, full of parks and without the grey smoggy sky. These future visions will be placed as billboards or posters throughout the city, and will show what these specific areas will look like.

The above advertising campaign would lead them to a specific website: nosmog.pl, where they would fill out a short questionnaire about their car use, including questions such as: ‘Where do you use your car?’ and ‘What sort of distance do you travel?’

The ultimate goal of the site is to pique the interest of the user and to get them to download the app.

Upon downloading the app, the user is dared to accept a challenge – to reduce the amount of pollution that they generate in the atmosphere through changing their travel choices, by, for example, swapping their car for a means of public transport. We would provide easily-understandable and quantifiable means of the effect of their actions, such as: ‘the reduction in air pollution equals burning one bathtub of plastic waste.’

Day 4 was spent on finalising the prototype and then conducting some user testing to ask the target user group what they thought of the app.

Here, it was important to define a list of open questions, starting with questions to get familiar with the user, followed by their knowledge of air pollution, and then finally going into the testing of the prototype.

What we found out:

The team went around different parts of Warsaw and spoke to the citizens. One of the recurring responses was: “I am willing to change my habits but businesses and government won’t change, and that’s where the real problem lies.”

They were amazed when we told them that as much as 50% of the air pollution in Warsaw comes from individuals, and 13% was from car use alone.

The response to the app was generally very positive and users were willing to give it a try. As expected, the greatest response was from under 45 year olds, who were much more frequent app users, than those aged 45+, so we knew that our next step was to figure out an approach for older people.

Would you like to read more about Design Sprints? Click on the link below:
Design Sprint 101: How to Solve Problems and Test Ideas in 5 Days