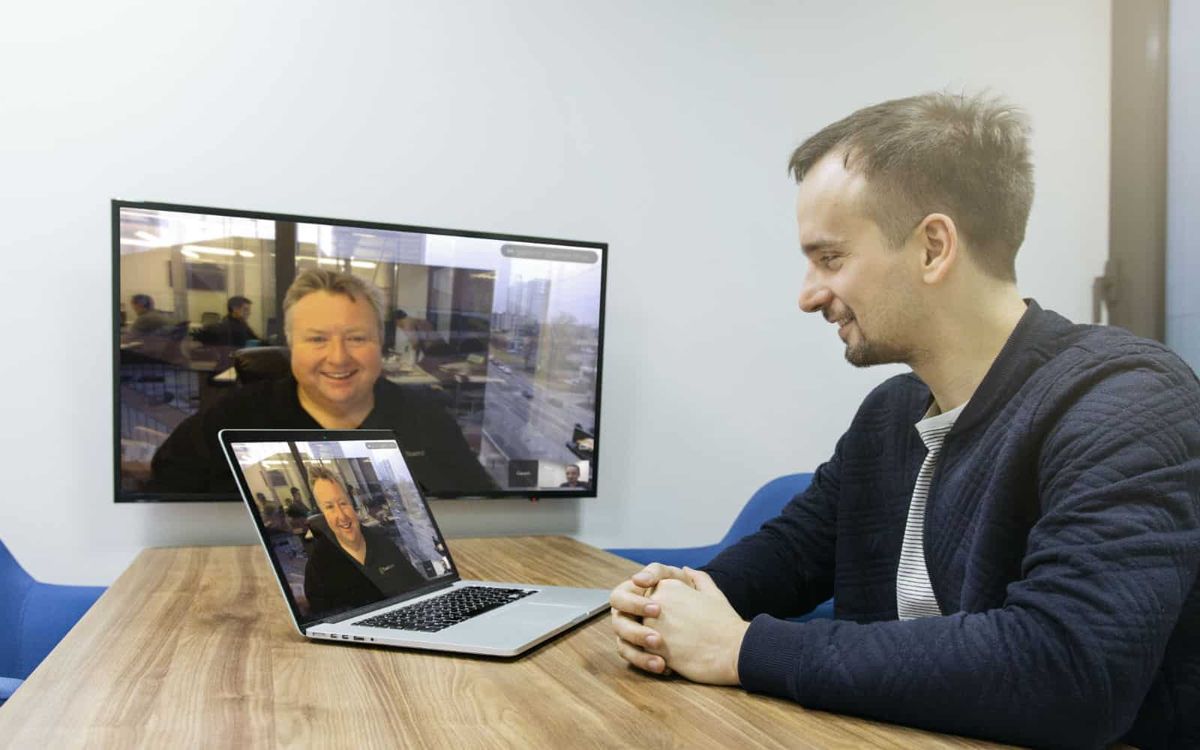 10Clouds is working with Trust Stamp on a revolutionary facial authentication technology, which can put an end to identity frauds. Maciej Cielecki (CEO of 10Clouds) and Gareth Genner (founder of Trust Stamp) talk about how something that started out as an outsourcing deal turned into one of a kind partnership, and why a blockchain-based biometric system may be the future of cybersecurity. The interview was originally published on Business Insider.

Trust Stamp’s biometric authentication system utilizes blockchain, machine learning, and computer vision to answer two questions: Who are you? and Should I trust you?. Based on a secure-selfie taken by a smartphone or webcam, it can check if people are who they claim they are. The solution already employed by a major US bank raises the bar for the security of online payments and encrypted messaging. And these are only a few of endless possible usages.

The system is developed by Sunflower AI Technologies – a company set up by 10Clouds, which has recently become a part of Trust Stamp. The ongoing relationship between 10Clouds and Trust Stamp lasts for over four years, and Sunflower is managed in Poland.

The interview below has been published by Business Insider Polska, but was conducted in English. Now we are sharing the original version with you.

What is 10Clouds, and what is Trust Stamp?

Maciej: 10Clouds is a software development company that works mostly with clients from the US and Western Europe. The company was founded a little over 8 years ago by two programmers and, since then, has grown to a team of 100, based in 4 different offices, including the headquarters in Warsaw. Trust Stamp is a tech company, too. Well, this is a minor spoiler…

Gareth: Actually, we have given up being a tech company. It’s not worth as much as an AI company (laughs). When people ask what we do today, we say that we are an artificial intelligence company focused on answering two simple questions: Who are you? and Should I trust you?

Gareth: Exactly! Right now, one of our main ventures is the project called Sunflower AI Technologies.

Maciej: Sunflower is a focused machine learning and AI company that 10Clouds set up. Trust Stamp had a significant and ongoing need for such services and products. We have developed expertise in machine learning and AI, and so, we created a specific company to use that expertise in. This company has now become a part of Trust Stamp but is still being managed by us here in Poland.

Gareth: Reverting to the initial two questions: Who are you? and Should i trust you?, Trust Stamp uses facial biometrics to compare the image of a subject with known images of a legal personality. Those may be an official ID document, or they might be images found through data mining, proprietary and social media resources. One of the unique technologies that has been developed is the ability to predict, using the Sunflower AI, whether the person in the image exists or not. It is checking not only if it is a living person, but also if their image has been digitally altered to obfuscate their identity. There are many companies that claim to have this technology, but typically they are using something very simple, such as asking the subject to wink at the camera. These systems are often flawed and vulnerable, so they are not secure enough. We want to change that.

Trust Stamp is also using blockchain. How does that happen?

Gareth: To explain the technology in a straightforward way: the image is converted into a 3D mask, and multiple measurements are taken of features within that mask, in order to create a secure hash that cannot be used to represent a face. There is a 1-in-a-billion chance that two faces will generate the same hash, so it is a unique tool, because it cannot be used for any purpose other than to compare it to another hash. In the case of banking applications, that hash is stored on the server so that they can re-identify anybody who comes for the second time. Much like cookies. We are also storing this hash in a blockchain. For instance, it can be used as a public key for an encrypted email service, like the one we are launching.

We hear about accounts being hacked all the time. But really, it is a lot more likely that your credentials were fished, after you voluntarily gave them to a third party. You can’t give away your face, nor lend it to somebody. They can’t steal it. Already, State governments in the US are proposing to use biometric hashes, to be tested as an alternative to the American Social Security Number for medical and tax purposes, in order to reduce the amount of fraud in those areas.

Could you give us an actual example of the service based on this technology?

Gareth: One of our biggest clients is a major US bank. The service was designed for cases when people are locked out of their bank account and failed to gain access by traditional means. It was not only successful in identifying users and letting them get reconnected where, otherwise, they couldn’t gain access, but it identified 2 criminals trying to attack the bank website within the first 24 hours!

The team is now building a neural network, which will enable these processes to be completed faster and allow more processes to be applied to each of the transactions. We believe the service has an extraordinary range of uses.

That’s a good start! What are your plans for the future?

Gareth: World domination (laughs). We think that the AI that we are building will have great significance for advisors and for governments in many countries. Our goal is to provide the definitive way of answering the questions I talked about at the beginning of the interview. Any enterprise or government that wants to answer these questions will look to Sunflower AI.

These kind of solutions are gaining popularity at light speed, so the breakthrough is just around the corner… One might say it already is a world domination-like set-up! Part of the Trust Stamp team is based in Poland and part in the US. How does it work?

The AI that we are building will have great significance for advisors and for governments in many countries.

How important is it to you that the team is international?

Gareth: I think as we grow it is increasingly important. Our first customers were from the US, then from the UK, but we are a global company. When you design products of this type, you have to be sensitive to how users in different countries will react to UX and to different data sharing standards. For us, having a team with a global perspective is the key to expanding the company.

Maciej: It is the same for 10Clouds. We see ourselves as a global company. For us the key to the ongoing expansion is finding international clients with inspiring ideas and a flare to change the world through technology. This is how we want to grow. Creating Sunflower together with Trust Stamp is a great example of that.

How is the relationship between 10Clouds and Trust Stamp?

Maciej: I think it is a very good partnership. We haven’t mentioned that we have, in fact, become a shareholder in Trust Stamp. That is important, because it is part of the strategic relationship we have built with Trust Stamp over the years. It helps us gain validity in the US when it comes to selling our services. It also proves that the relationship with 10Clouds can flourish into something much more than plain outsourcing.

Gareth: When two companies are committed to innovation, it makes no sense for the innovation to stop at the product. It should also be reflected in the way that the relationship is managed. We should never be scared to create new relationship structures, if they can help us create more value.

One more question: How did you come up with the name?

Gareth: We work with microservice architecture. The developers needed different names for each of the microservices, so they started out using names of different cereals. We had wheat, rye and lentil, then they strayed to some prettier names, like poppy and, eventually, the sunflower. We really liked Sunflower as a name, so we adopted it to describe the machine learning and the AI microservices we are involved in.

Frauds, Identity, AI… — could Sunflower become the inspiration for a Black Mirror episode?

If you are ever in need of a team experienced in blockchain, don’t hesitate to contact us – we will be happy to help you!

How is it to work with 10Clouds? Check out these videos.

10Clouds Recruitment Process for Developers: How do we #CARE