The Journey of a React Native Developer 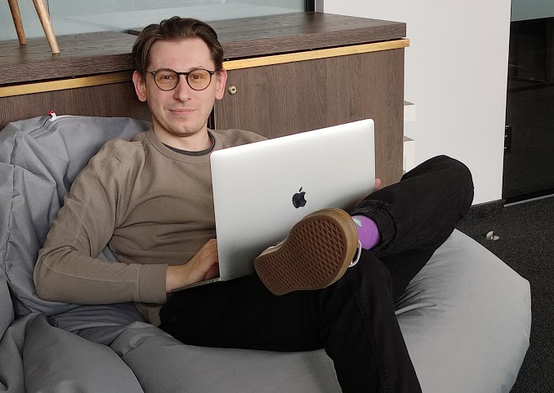 Having joined 10Clouds in March, Jaroslav is currently the newest member of our Mobile Team. We decided to speak to him about his career journey so far. His recruitment process was conducted by Paulina, whose story we shared on our blog recently. Jaroslav sees her often, as well as other members of the People Team, since he is based in Warsaw and enjoys working from the office.

Smart Device Technology studies as a way into the industry

You can say Jaroslav’s adventure with mobile started when he chose to study Smart Device Technology. This very niche degree dedicated to creating mobile apps was discontinued after only several years, but by that time Jaroslav was already hooked on JavaScript and React.

Jaroslav lights up when he talks about how he started his adventure in the tech industry. A chance encounter with someone looking for React developers at a hackathon he participated in as a student convinced him to pursue an internship with a local company. “They weren’t really looking for interns, but created a role when I got in touch with them directly,” he remembers.

This proactive attitude has definitely stood Jaroslav in good stead and shaped both his university experience and later his working life.

React Native as a natural choice for mobile development

Jaroslav’s curriculum included technologies such as React Native, Ionic, jQuery Mobile - all of the popular front end technologies for mobile development back then. It feels quite natural to switch to React Native when you already have a solid background in React, says Jaroslav, and at the time it was one of the most popular technologies for Mobile Developers.

So he decided to write an app in React Native as his Bachelor’s Degree project. It was an app for tourists, presenting users with local attractions and making a list of places they had visited using geolocation.

After some further studies in AI, Jaroslav decided to find a full time job and while it wasn’t a Mobile Developer position, his main focus was in fact cross platform mobile app development.

From corporation to software house

Jaroslav’s first experience was in the clinical research industry, working on an app that’s still being used by Clinical Research Associates at the company. From working on an MVP, through expanding the product for internal use, to trying to further develop it as a SaaS product, he gained quite a lot of interesting experience.

Still, this was a tough environment when it came to personal development. After 2 years Jaroslav felt he was ready for a new challenge and started looking for roles both in Poland and Lithuania. After a lengthy process, he was offered a role in Vilnius, but since he was already in Poland he decided not to take it. He found a 10Clouds job ad on Just Join IT and quickly went through the recruitment process.

There were a lot of differences between his previous experience and 10Clouds, starting with the recruitment process. It was surprisingly quick, with just 3 steps, from his initial conversation with the recruiter, through an interview with Volodymyr and Łukasz from the team, to the final interview with the Head of Mobile in just about a week!

Another thing was the communication style. Working in a corporate environment, Jaroslav was used to communicating everything on email. “Your contribution wasn’t really visible when everything was an Outlook email chain,” he says. There’s also more focus on the individual, with people checking in to see how you are.

It was clear to Jaroslav that the team really cares about team building too. He remembers the different team building initiatives being mentioned at both the technical and the final interview. And indeed, since he joined the team, Jaroslav already took part in a social event. He was the one to suggest playing AmongUs - on mobile, of course! - which everyone agreed to.

Now, Jaroslav is looking forward to meeting his team in person, when travelling between Warsaw and Poznań is possible again.

Want to join our Mobile Team?

What is Yield Farming?

What Is OnChain Insurance?