Cloudopoly - a new take on a well-loved game 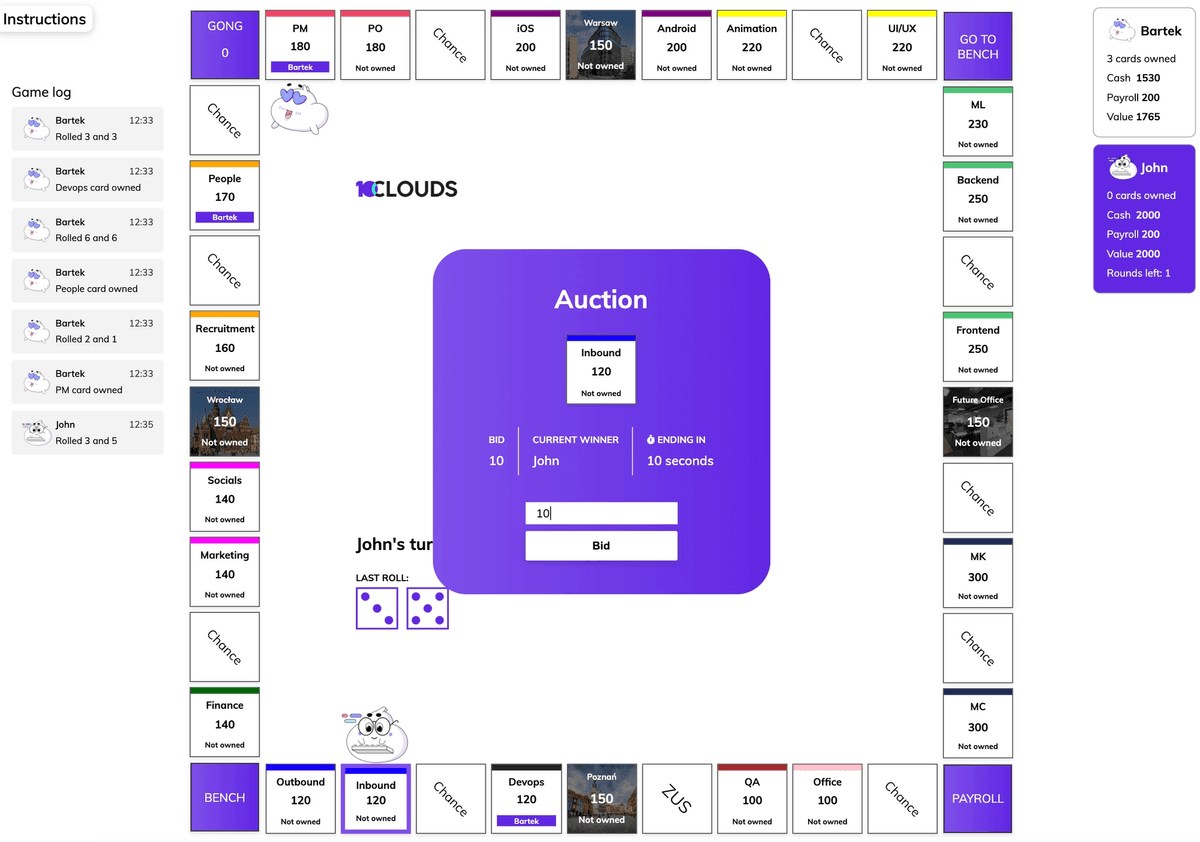 The COVID-19 pandemic has led many companies to rethink what socialising means and how a team interaction and an element of fun can still be brought into the work environment at a time of uncertainty. At 10Clouds we’ve worked hard to stay connected socially during the pandemic, and we’ve found that some of the best ideas for this have spontaneously emerged from employees. One of them is Cloudopoly, developed by our very own Bartek Bilejczyk. It’s a digital take on Monopoly, but with a twist. We talk to him more about what the game involves.

Where did the idea for Cloudopoly come from?

The pandemic made it difficult for people to hang out with each other. I first thought about creating an online game in September 2020, when restrictions and the weather started to become more depressing. It seemed like a great way to interact socially while we were all working remotely.

At that time, I started watching Rick and Morty, got very excited about itand found the Rick and Morty Monopoly version to play with my friends. There are all kinds of Monopoly editions, such as Fortnite, Cheaters or Star Wars. So I decided to create Monopoly for IT and call the 10Clouds version Cloudopoly.

Creating such a game has always been my dream and I felt experienced technically and motivated enough to deliver it.

How did you go about this project?

I was excited and optimistic about the project. I had a very effective, one-person brainstorming session and wrote down the general idea about the game. All the subsequent ideas flowed from that.

The next day fortunately brought me down to earth. I gave myself some mental space to go about this project as a nice-to-have, without any stress or pressure. I created a mental deadline - 31 Dec 2020 - but I treated it lightly, only as a signpost.

One of the best decisions I made in the early stages of Cloudopoly was to use everything I learnt at 10Clouds over the last 4 years in terms of project management.

I created a legitimate backlog with user stories sorted by priority and value added. I used the MOSCOW approach to understand what is a Must/Should/Could Have for this project. Then, I made some loose assumptions about sprints outlook and started working. This approach allowed me to keep my head clean and I could focus on development. It was particularly important as sometimes I had only 1 or 2 hours to work on this project, which didn’t leave any space for waste of time.

I didn’t do any drawings or designs, though. I just went with the flow. It wasn’t the best choice, but then again, I’m not a designer and it probably wouldn’t have helped much.

From a technical standpoint, I viewed this project as a great opportunity to test a new version of the Vue framework (Vue 3). I wasn’t sure how to deal with the online part of the game so I first created a Proof of Concept version of the game which operated offline.

After overcoming technical difficulties and producing some technical conclusions, I moved the whole game online using Firebase and could start testing features in a real environment.

Who else was involved in the game’s creation?

Nobody at 10Clouds knew about the project until I came up with the PoC (Proof of Concept) of the game. Only after creating some basic features did I share the idea with a few colleagues on a secret Slack channel.

I received great feedback from them and we met a couple of times to discuss the general flow, rules of the game and ideas for further development. We also had a lot of fun creating Chance Cards.

During the following weeks, in November and December, we held 3 test sessions which discovered bugs and were very effective in terms of conclusions for new features, backlog refinement and what should be done next.

How did you introduce the game to the company and what was the reaction?

I managed to deliver a satisfactory version of the game on 22nd of December. The final days were typical crunch time as I worked on it until midnight or 1AM. It wasn’t the perfect moment to launch, as many people already took time off for the Holidays, but the reaction showed me it was worth it. I got a kind of closure after so many hours spent on this product.

Our Marketing & Sales departments held a Holidays meeting that day and one of my dear friends from the Marketing department introduced me to this meeting to show and play Cloudopoly. Everybody was really surprised and amazed at the same time, which was a very kind and fulfilling moment.

After that, I wrote a long message on our #general Slack channel explaining what I created, how we can use it and shared some screenshots. I received a total of more than 100 reactions and many comments in the Slack thread with warm words about what a great idea it was.

It certainly made me happier during the Holidays and I appreciated it a lot.

What are some of the 10Clouds specific ideas used in the game?

The general feeling and flow of the game is very similar to classic Monopoly. It makes the game easier for newcomers.

However, there are a few key concepts that are 10Clouds and IT-oriented:

There are so many other cool, custom features in Cloudopoly. Some of them are:

- Numerous Chance Cards spots where you can win or lose something, for example:

- Start has been changed to Payroll and it’s possible to get a raise through Chance Cards. This way you can earn more or less instead of 200 every time you go through Payroll.

- Jail has been changed to Bench - it’s a rare situation when some of our Delivery employees don’t work on a commercial project and in Cloudopoly they have to wait a round without playing.

Our designers created some Instagram stickers with beautiful cloud illustrations which I used as avatars for players.

What are your plans for how the game will be used and developed?

There are so many ideas and I don’t know when I’ll have a chance to implement them. I already created a mobile version of the game, which I’m very proud of. It took less than 4 hours to adjust the desktop version to fit on mobile.

The plans for the development and use of the game are both short and long-term.

Generally, it’s always nice for me if we play the game, once every one or two weeks. I would like to show the game to more people in the company in the near future so that we can spend more time together and develop better relationships within the company.

There is also a plan for creating a physical board game out of Cloudopoly Online over the next few months, but it’s still only an idea.

From a developer standpoint, in the next 3 months or so I would like to:

In the long run, I would like to make this project available in some kind of invite-only and white-label mode. In order to do this, a general rethinking of the project structure is needed, so that it can be more flexible, easily maintainable and adjusted to other companies needs.

UPDATE: Cloudopoly has morphed into RemoteFun - a fully virtual and customizable team building platform with 3 activities that will help you keep good relationships within remote teams. We encourage you also to read RemoteFun's take on remote work.

Thank you Bartek and we wish you every success!

What are MLOps and how can they be useful to your business?

7 must-have skills for developers in 2021