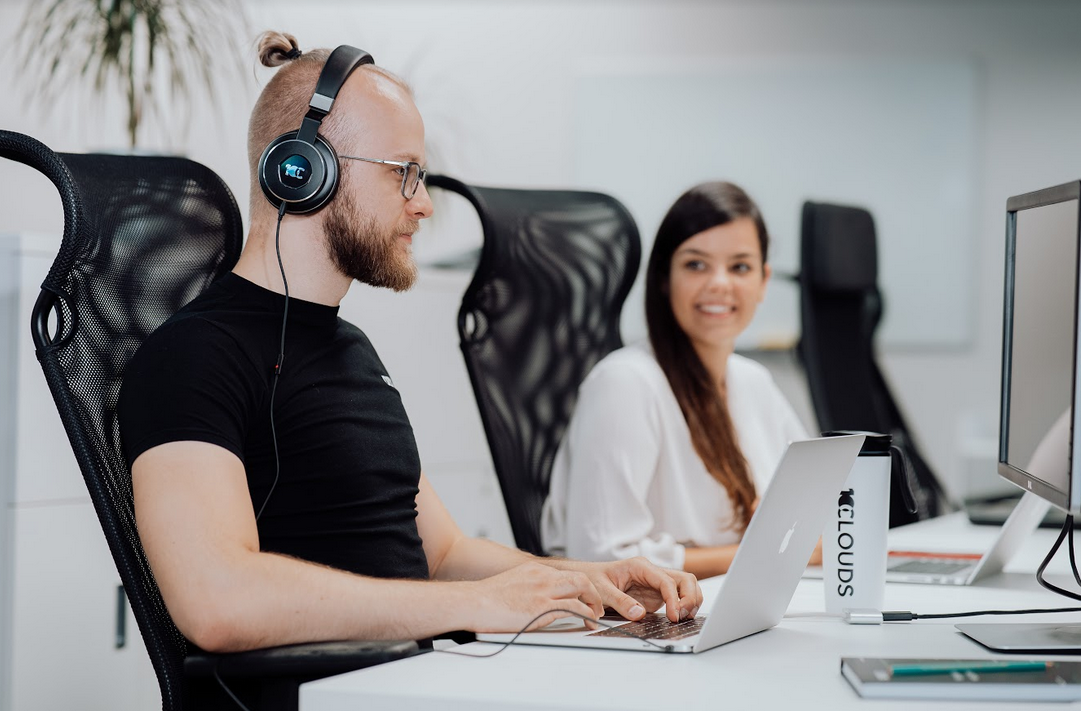 We recently wrote about our predictions for the top mobile development trends of 2021, and now it’s time to do the same with frontend development. 2020 was a year of interesting evolution in the world of frontend, including React establishing itself as the most popular framework by far, AWS continuing to reign supreme among cloud providers, and micro-frontends having an important role to play.

So what will the future hold for 2021? We asked all 10Clouds’ frontend developers to give us their predictions. Here are the seven trends that came out top. Let's check in at the end of the year and see how many of these came true!

1. The continuing rise of TypeScript

TypeScript is sometimes referred to as the improved version of JavaScript and not without reason. A recent Stack Overflow surveyrevealed that as many as 61.7% of respondents named TypeScript the most loved programming language. Similarly, GitHub’s 2020 State of the Octoverse report shows the exponential growth of TypeScript since 2017.

Why has it been so popular?

Reliability - In comparison to JavaScript, TypeScript code is more reliable and therefore more helpful in avoiding errors. Types invalidate many basic errors found in JavaScript codebases. You’re also able to get a quick feedback loop to fix any errors that crop up when writing new code and refactoring.

Predictability - The beauty of TypeScript is that all elements remain the same as how they were defined, thereby increasing the likelihood of functions performing in the intended manner. If you declare that a variable is a string, it will always be a string.

Readability - TypeScript can be particularly useful to distributed teams working together on a project, because it’s easy to see the design intent of those who initially wrote the code. What’s better than code that speaks for itself?

We can expect further TypeScript improvements over the coming year, with the backing of Microsoft.

2. The rise of Flutter Web

With the latest "Flutter 2" update, Flutter Web technology goes stable. We can expect many new web applications written this year. But there are some misconceptions about the usage of Flutter Web. It's not here to replace HTML, React, or Vue. Flutter Web shines when you want to create a PWA (Progressive Web App) or when you want to move your mobile app to the web.

At 10Clouds, we find Flutter Web useful for building internal web tools like an auction service to sell old hardware. On the contrary, we don't recommend it for content presenting pages that should be available to the broader public or for pages where SEO is an essential factor.

Three main reasons why we believe Flutter Web’s adoption will be on the rise:

Speed of development - Dart (the language used in Flutter) is easy to learn and write. Along with the Flutter UI building system, developers are able to build custom, beautiful, and animated applications very quickly.

Multiplatform - Along with Flutter for Desktop, developers can create one shared codebase and deploy their applications to iOS, Android, Windows, macOS, Linux and create a webpage from it.

Novelty - Flutter is a new player, backed by Google, and that freshness is also an advantage. It breaks the mold of using JavaScript as an engine and goes with the sound Dart language. Also, its widgets (views) system takes what's best from other declarative frameworks. With all this, it's just fun to write, and many developers are likely to jump on the bandwagon.

Vue.js was released in 2014 and since then, it has been growing exponentially. It’s been met with much popularity among developers, with more than 2 million Vue.js downloads in December 2020 alone. Big names including Xiaomi and Alibaba have already put it to good use, and many more are expected to follow suit.

What are the benefits of Vue which have led to this steady popularity?

Simplicity - Vue is generally regarded as easier to use than Angular, which is why it's becoming more popular for building web solutions, particularly single-page apps.

Ease of integration - Because Vue is based on a JavaScript framework, it can be easily integrated into other apps built in JS. Developers can add Vue.js CDN and begin using it immediately.

A range of great tools - Vue.js is also very popular for its great tooling.The new Vue CLI enables developers to start a new project with features such as state store, linting, unit testing, Typescript and PWC built in (to name just a few.) In addition, Vue CLI also provides a UI for managing your projects.

4. The even greater Gatsby

Back in February of last year, we wrote about using Gatsby to build our company website. As it turned out, Gatsby would continue to rise in popularity over the past year, and is set to continue being on the rise into next year and beyond. Why? Put simply, the answer is SEO. While single page apps are dynamic and powerful, they aren’t ideal for SEO, which is such a powerful driver of traffic for every business in the modern age.

Here’s where Gatsby comes in along with its counterparts such as Next.JS. Gatsby offers static site rendering while Next is about server side rendering. TheW3 Techs Technology Market Report (May 2020) lists Gatsby as the single fastest growing framework.

Apart from a huge amount of improvements aimed at making development easier, Gatsby optimizes our website for users. If developers don’t make any significant mistakes during the coding process, they are guaranteed to receive near perfect scores on the Google performance test with Lighthouse.

Minimalist designs have always been and will be popular. However, it’s becoming more apparent that the formula is running out. Its difficult to provide the soul of individuality to a project that is limited by an aesthetic form. Users slowly become tired of this type of design and expect something more. And this is where animations come in handy, allowing you to still navigate in a minimalistic frame, adding a kind of elegance to them. Animated micro interactions become more attractive, and can improve the overall user experience and usability of the page (e.g., helping to navigate the page, drawing attention to messages requiring action, etc).

Motion design emerged at the end of 2019. In 2020, this trend started to become more popular and we expect that in 2021 it will be even more widely used.

The challenge will be to keep the balance between quantity and quality. Too many bad animations can put the user off. On the other hand, well-designed interactions with beautiful animations allow you to build an emotional bond with the user, thanks to which his user satisfaction and interaction with the app is likely to increase significantly.

Microinteractions such as animating the tooltip that appears after hovering over the icon or closing the window are not problematic in terms of weight and load time. But files with larger animations remain a problem (e.g. illustration for a paragraph). SVG files can provide a solution, but the most promising is the relatively new AVIF format, which should gain increasingly wider support in browsers in the near future, supporting the motion design trend.

While next generation reactive frameworks such as Vue.js are rising in popularity, React continues to reign supreme and is expected to continue to do so. According to the latest Stack Overflow survey, React was the most popular framework, with 68.9% of respondents saying that they’ve either used it or have an interest in using it in the near future.

Why is react expected to continue making waves in 2021?

Speed and simplicity - ReactJS enables developers to create engaging and user friendly web apps with the use of minimal coding.

Flexibility - In comparison to other frontend frameworks, React code is far more flexible because of its modular structure which saves both time and money for the business using it.

Widespread use among the top brands in the world - There are currently almost a quarter of a million websites using React. The framework has been adopted by industry giants such as Netflix, PayPal and Apple.

7. Greater use of JamStack

Jamstack stands for Javascript, APIs, and Markup. It’s a software architecture designed to make the websites quicker, more secure, and more scalable. Jamstack is fairly new to the field of frontend development, but it is rapidly gaining in popularity and we believe that it will reign supreme in 2021.

According to the State of Frontend 2020 survey, almost one-third of the respondents have built a Jamstack website or app lately. At 10Clouds, we also jumped on the JamStack bandwagon last year, and we have no regrets!

These are just a few of the many benefits of JamStack:

Low cost - Static file hosting is the most cost-effective way to deliver content to users. What’s more, because most of our infrastructure isn’t needed after the build, it can be scaled down.

Availability - Because we’re creating static files with the whole page ready we don’t need our CMS or databases to be available after the build. If they fail or are no longer available we’re only blocked from releasing content updates. This means that users are still able to view the previous version of the website.

Security - If our website doesn’t need any data, our user will not have any way of maliciously accessing our database. This disables a big vector of attack, thus significantly reducing risk.

A year of great promise

That’s our list. Let’s check back and see what this year brings us in the world of frontend development and whether there are any unexpected surprises!

How can developers benefit from being on LinkedIn?

The role of a QA tester in a software house

5 practical ways to improve your SEO